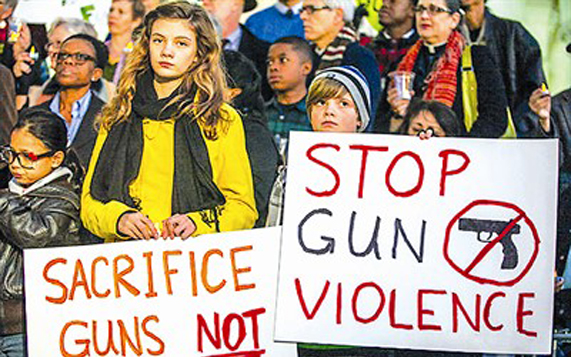 As the anniversary of the Newtown shooting massacre quickly approaches, I am still dumbfounded and angry that our federal lawmakers refuse to pass sensible gun laws and do little to make our schools the safe zones they should be. Teachers and students are being attacked more than ever.

Last week, in Sparks, Nevada, a 12-year-old student shot and killed himself and teacher Michael Landsberry, seriously injuring two other students. Two days later, another teacher, Colleen Ritzer, from Danvers, Massachusetts, was attacked and killed by a 14-year-old student in the bathroom of the high school where she taught. What we can do to keep our children and ourselves safe?

A few states, New York, Connecticut, Maryland, and Colorado, have passed tougher gun laws, but much needs to be done to makes schools safer for American children and teachers. Connecticut added 100 additional assault style weapons to their gun ban and required background checks for all firearm sales. New York passed the toughest gun law in the nation: limiting access to guns by the mentally ill, redefining assault weapons to ban most from purchase, and reducing the number of allowable rounds in a magazine to seven. Above all, their law requires harsher penalties for illegal gun use and background checks in public and private gun sales. Baby steps, but in the right direction.

Unfortunately many states have introduced laws that would further arm their campuses, instead of trying to solve the escalation of violence in our communities and schools. Hiring more armed guards or allowing teachers or school sentinels to carry weapons seems to be a typical response. Arming school staff is risky at best. In New York City, trained policemen trying to take down criminals have shot numerous innocent bystanders in the crossfire. If trained policemen shoot the wrong people, what will happen to children in the crossfire between an armed shooter and an armed teacher, or other school employee? Not to mention that in all likelihood, schools will be held liable if accidental shootings and deaths occur.

President Obama has signed 23 Executive Orders on Gun Safety, but I have not seen any evidence that the orders have made any real difference. Over 27,000 people have died from gun violence in America since the Sandy Hook shootings and this number does not even include those who may have used guns to commit suicide or those killed accidently. These deaths are often categorized and tallied differently.

Once again, U.S. school districts are left to their own devices to solve their problems. One of the best guides I have found is the NEA Health Information Network’s School Crisis Guide, which explains in detail how to create an environment to recognize problems and help troubled students before violence occurs. Ohio Attorney General Mike DeWine published School Safety Task Force, Recommendations and Resources and the Ohio School Board Association has published Protecting Ohio Schoolchildren, An OSBA Guide to School Safety and Security.

Perhaps, the biggest obstacle for schools to prepare for emergencies is finding time and money to adequately train staff and students on what to do. Administrators will have to re-prioritize how we spend our funding and time, and decide what staff to hire, because, sadly, this is a problem that is not going to go away unless we can elect individuals who will support public school safety and stronger gun laws.