American journalist Walter Lippmann once said, “Successful politicians are insecure and intimidated men. They advance politically only as they placate, appease, bribe, seduce, bamboozle or otherwise manage to manipulate elements in their constituencies.”

Most people’s viewpoints aren’t quite as cynical as Mr. Lippmann’s, but the simple truth is that some politicians do try to manipulate their constituents into agreeing with their initiatives by first stirring discontent. Satisfied people cannot be seduced, so to build a case for any crusade, these lawmakers try to create a need for the measure by cutting sources of funding. Such is the case with Ohio’s current state government.

Three years ago, Ohio’s Republican governor and the GOP-controlled legislature used the state budget to drastically cut public funding to local governments, which they hoped would create a need for the “tools” provided in Senate Bill 5. Although Ohio voters overwhelmingly rejected the SB 5 tools in a referendum, those budget cuts created a significant loss of local facilities, services, and jobs, and elements in SB 5 have been introduced piecemeal ever since as cost-cutting measures in communities throughout Ohio.

Deep cuts to Ohio public schools, as well as a plethora of unfunded mandates, have helped convince Ohio citizens that there’s a real need for the dramatic expansion of charter schools in the state. Unfortunately, Ohio charter school expansion is a non-transparent movement that has not been held accountable for its use of public tax dollars. Ohio Department of Education data shows that the state’s public schools lost more than $870 million in state funding to charter schools in fiscal year 2014, amid ongoing reports of theft, misappropriation of funds, overpayment to vendors, nepotism in the employment of family members, and excessively high administrative salaries in many charter schools. 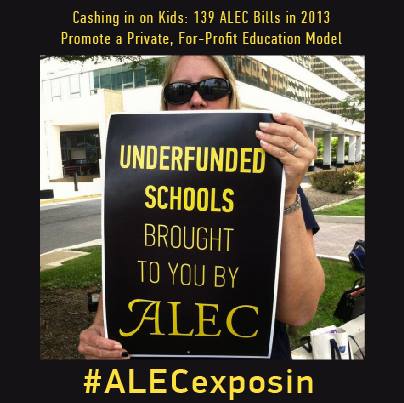 Most of Ohio’s Republican legislators belong to a powerful organization of lawmakers and corporations, the American Legislative Exchange Council (ALEC.) In 2011, the Center for Media and Democracy (CMD) revealed the powerful control of the corporate-backed American Legislative Exchange Council (ALEC) over the legislative process in many states in the US. It published a report showing over 800 business-friendly bills that were created, endorsed, and secretly voted on by corporations and Republican lawmakers. People for the American Way, Progress Ohio, and Common Cause documented the hold that ALEC has on the legislative process in Ohio and divulged the fact that 43% of its legislators belong to this corporate bill mill.

ALEC strongly supports school privatization through charter schools and vouchers. According to Bill Phillis, of the Ohio Education and Adequacy Coalition: [quote]ALEC is a champion of charter schools and voucher legislation, and thus is geared toward starving the public common school. One of the missions of ALEC is to replace the public common school system with private market-driven education thrift stores. Some Ohio legislators will press forward the concept of a voucher for every student.[/quote] Ohioans can support their public schools by voting for candidates who are champions of public education. Voters must exercise their power at the polls to push back against ALEC legislators who placate, appease, bribe, seduce, bamboozle or otherwise manage to manipulate elements in their constituencies to further ALEC’s privatization agenda. This is an important election where voters can and will “create a need” for Governor John Kasich and his ALEC allies to find jobs outside of the political arena.

Visit action.ohea.org to learn more about OEA’s 2014 Campaign and how you can help to elect pro-public education leaders in this election.