Reporters, if you’re on deadline, please write, “Help, I’m on deadline!” as the subject of your e-mail message.

Gina Daniels: Senate needs to put students and constitution ahead of partisan politics 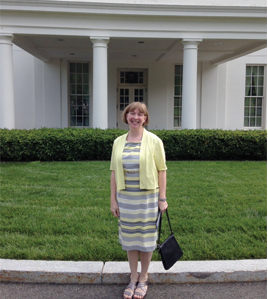 WASHINGTON – May 18, 2016 – Nine civics, history, and social studies teachers, including Gina Daniels from Licking Heights School District, went to Washington today to demand that Senators do their job and hold a hearing and vote on President Obama’s nominee to the Supreme Court, Chief Judge Merrick Garland. They joined a White House roundtable with senior Obama administration officials to discuss the confirmation process and how educators teach their students about the Supreme Court and its role in our national government.“Senate leaders are sending the wrong message to our students by failing to do their job and hold a hearing and a vote on a highly qualified Supreme Court nominee, Chief Judge Merrick Garland,” said Ohio Education Association President Becky Higgins. “It’s our job to teach our students lessons about the importance of the U.S. Constitution but apparently some Senators, like Rob Portman, need a lesson as well. That’s why these civics, history and social studies teachers from across the country came to Washington to tell Senate Republicans to stop playing political games. It’s time for elected officials to put their constitutional duty ahead of partisan politics.”

“Senator Portman should just do his job, and take action on a Supreme Court nomination,” said Gina Daniels, a history teacher in Licking Heights. “It would be like me refusing to teach the Revolutionary War to my students. That’s unacceptable.”