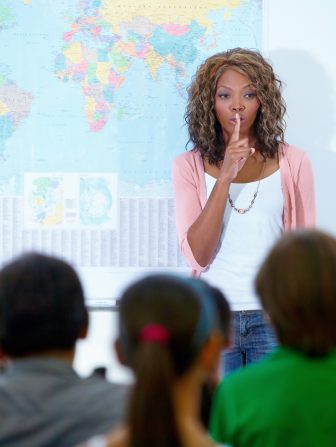 One of the first lessons a child learns in school is to listen and be quiet. Silence is often desired in schools, unless we ask for participation. But lately, I’m beginning to wonder if we are doing our students a disservice when we emphasize the value of silence … because there is also a danger in certain kinds of silence.

As part of a study of Art Spiegelman’s Maus books and the Holocaust, my sophomores recently viewed a visual testimony of Kurt Messerschmidt. A young man during the Holocaust, he witnessed German soldiers forcing an older Jewish man to pick up some broken glass from the windows of a destroyed Jewish business on Kristallnacht. He noted that while he and a friend helped the old man pick up the glass, many other people stood by and said nothing. He believes that there were certainly other people who disapproved of the Nazis’ actions, but “Their disapproval was only silence, and silence was what did the harm.”[1] Sonia Klein, another Holocaust survivor who was interviewed after the riots in Charlottesville, warned that “Silence is the first thing after hate that is dangerous, because if you are silent, it’s an approval of what’s going on.”[2]

At the end of the Holocaust unit, I asked my students to read an article about Martin Niemoller[3] and his now famous words about remaining silent when other groups were persecuted and finding no one left to speak out for him when he was targeted. I asked my students how Niemoller’s words might apply today. One girl answered quite simply and succinctly: “We can apply these words to today by not allowing something that we wouldn’t want to happen to us to happen to somebody else.” She makes an excellent point. Maybe it’s not as simple as teaching the Golden Rule (do unto others as you would have done unto you). Maybe it’s time to teach kids to advocate for those being slighted or hurt in our world, even if they aren’t directly involved with the victims or the perpetrators.

In another class this week, my juniors read Walt Whitman’s poem “I Sit and Look Out”[4], a poem in which the speaker gazes out at “all the sorrows of the world, and upon all oppression and shame”. He lists several of those sorrows he observes in the world, including “treacherous seducer(s) of young women,” and “slights and degradations cast by arrogant persons upon laborers, the poor, and upon negroes, and the like.” The poem ends with the line “All these — All the meanness and agony without end, I sitting, look out upon,/See, hear, and am silent.” We discussed why the speaker in this poem (and people in general), upon seeing someone in need, choose silence over speaking out, and choose passive observation over direct action.  My students mentioned greed, selfishness, and fear. They also decided that sometimes people may not even be aware of a need, or if they are, they might feel that one person’s actions or words would not make a difference.

My juniors were also familiar with Ralph Waldo Emerson’s belief that “for nonconformity, the world whips you with displeasure,” so I suggested that perhaps another reason people choose silence over action is that they have seen what has happened to others who spoke out. Colin Kaepernick peacefully protested an issue which plagues our society today (and which Whitman wrote about in his poem over a hundred years ago). And for that, Kaepernick lost his job. When other players knelt in solidarity with him, the President chimed in with profanity directed toward those players, critics berated the players who protested, and the news media, for weeks, was centered on this issue, this scandal, started by one man’s peaceful act of nonconformity and civil disobedience intended to speak out against an injustice. Heather Heyer, an anti-racism activist who went to Charlottesville to protest the hatred spewed by white supremacists, paid with her life for her efforts to stand up against an injustice.

So is speaking up worth it? It’s not as safe as remaining silent, that’s for sure, nor is it as easy. There are certainly repercussions that come from speaking our beliefs in “words as hard as cannon balls,” as Emerson implores us to do in “Self-Reliance”, and many of those consequences are not pleasant. But can our society afford to continue sitting by in silence as injustice and oppression happen around us?

Whitman’s poem “I Sit and Look Out” was written in the late 1800s. My students and I realized that of all the sorrows he lists, 13 in total, we still have every single one in our society today, with the exception of famine at sea. What does it say about humanity that over 150 years later, we have not figured out a way to eliminate these man (and woman)-made sorrows from our world? Where has silence gotten us?

As teachers, we can appreciate a quiet classroom, heads bent over desks, the only sound pencils scribbling as our students diligently work on an assignment. But I am going to make certain that in 2018, I make it a priority to teach my students the beauty of using their voices to break inappropriate silence and advocate for others. Maybe we can manage to address at least some of the sorrows that Whitman wrote about all those years ago if we help the next generation be equipped to do more than sit silently by and wait for someone else to take action.