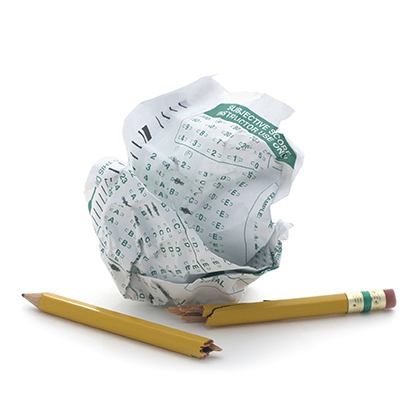 When I heard the news last week, my first instinct was to raise my fist in the air and yell “YESSSS!” You listened to the very public outcry from teachers and parents, and you got rid of the PARCC.

Then I began to think about the weeks of my life I spent training to prepare my students for the test. The summer days I missed being with my own daughter because I was in a workshop learning how the PARCC was structured. The days I missed teaching my students because I was taking the practice test myself with my colleagues, so we would know what we were preparing our kids to do. The time on my own that I spent revising my lesson plans and my assessments to mimic the PARCC style so that my students would be familiar with the format.

And then there’s the time PARCC wasted in my classroom. The days I spent giving my kids revised assignments so they could get used to the two-part questions and comparison/contrast style essays. The days we spent going to the computer labs to practice logging in (this ended up being five days before we were all successfully able to do it, due to computer issues and other communication fails on PARCC’s part). The days of learning we missed while we were actually taking the test, and the days we couldn’t move too far ahead because half of the class was testing in another subject during English class. The time involved in this little experiment, as you can see, was extensive.

I’m not a psychologist, so I won’t even try to calculate the damage done emotionally to kids who were frustrated at best and traumatized at worst by the PARCC. But I did witness it. My honors students, who want to do their best on any task given to them, gave it their all, which exhausted them and made many of them feel “stupid” for the first time in their lives. This could be because analyses of the practice tests showed that the reading selections were at least two grade levels higher than the grade of the students being assessed1 or because many of the test questions were so poorly written that my colleagues and I had a hard time figuring out what was actually being asked when we took the practice test.

I’m not sure even our best math teacher could figure out the financial cost of the PARCC debacle. The news says 26 million dollars2 was spent just for PARCC to provide the tests to Ohio. This does not factor in the money school districts spent on training their teachers and subs for those teachers who were trained during the school day. I can’t even begin to imagine the true financial cost.

So yes, while I am relieved in many ways that the PARCC is now history, I’m also angry. I’m angry that my kids were used as guinea pigs on a very large scale for your little adventure in testing. Let me be clear; I have no problem with the Common Core Standards. I think they are tougher than the old standards, but they are realistic for the most part and worth striving toward.  Raising the bar is good for Ohio’s kids and I think teachers are up to the task of doing that. But the PARCC test was rushed out and a lot of money was made by a lot of people who were invested not in our kids’ education, but in PARCC and Pearson.

If I hadn’t taught for 20 years, if I still had that naivety that young teachers have, I would dare to hope that you would follow up the “no more PARCC” announcement with one that says, “Listen. We trust that Ohio’s professional, degreed teachers know how to teach to the standards they are given. And we trust that if a student passes their classes, then the professional, degreed teachers have determined that he has mastered at least the minimum skills necessary in that area to move forward. So there will be no more state-wide standardized tests to determine which students, teachers, and schools are failing. We will put our faith in you, the educators. We trust that you will not pass kids through without basic skills, that you will challenge every kid to go well beyond the minimum, and that you will will make fair accommodations for the kids with learning disabilities. After all, YOU are the ones who have studied teaching methods and your content area for years, earning one or many times two degrees, and continuing to refine your practice with professional development after your degrees were earned. And YOU are the ones who have actual classroom experience. So we know you’ve got this. We’re going to stick to dealing with the economy of the state, and maybe by doing so we can figure out what to do about the funding of public schools and your students who live in poverty, both of which would help you do your jobs. Teach on.”

Sadly, I know that is completely unrealistic. There will be another test, more money made, more frustration, more time spent, more money wasted. You want accountability, and standardized tests seem to be the only way you can think of to get it. I can’t change that, but I ask you to use your position of leadership to legislate common sense. I urge you to trust teachers’ judgment, to include us in your decisions about tests and testing, and to take your time in replacing the PARCC. Please listen to our opinions before the tests are given, rather than dealing with our outrage after the damage is done. Remember that you are not dealing with products on an assembly line, variables in a science experiment, or numbers in a spreadsheet. You are dealing with children and their experience with learning and with school. I hope we can all agree that our goal for Ohio’s kids is not to teach them how to master taking a standardized test by the time they graduate, but to inspire in them a love of learning and a passion for bettering themselves through knowledge and discipline. If Ohio’s students graduate with those attributes, I believe our teachers will have done a good job and our state will be in good hands. Even if we don’t have the test data to back it up.