Most mornings, after about three or four slaps at the snooze bar, I get up around 6:15. One school day this past March, though, I was up, out the door and in the parking lot of my district central office by that time. On that frosty morning, I met up with seven other bleary-eyed individuals for a trip to Columbus for OEA’s Lobby Day.

It was a diverse group that included two other teachers, a retired teacher, a parent, our Assistant Superintendent and Treasurer, as well as a Sylvania School Board Member.   Not only was the group full of people with diverse ties to public education, they also had diverse political views.

We had a long day. It’s a 300-mile trip to Columbus and back, which meant five hours on the road. When we weren’t on the road, we were in meetings, starting with a briefing at the OEA office, followed by meetings with Representative Teresa Fedor, Senator Randy Gardner and an aide from Representative Barbara Sears’ office. Throw in a break for lunch, and we ended up with a ten-hour day that left me ready for a nap. 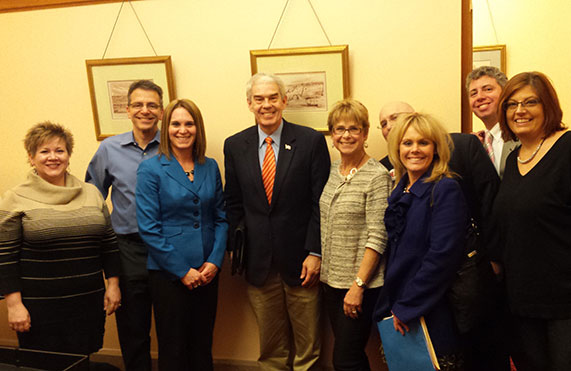 Following our trip to Columbus, lawmakers didn’t immediately take action to change the amount of time spent on testing or the amount of money our school district received. Charter school accountability didn’t improve either. The next day, I went back to my classroom and legislators went back to their meetings and responsibilities as scheduled.

To the untrained eye, it may seem that we didn’t accomplish much by participating in OEA Lobby Day.

My group’s participation in Lobby Day, along with the efforts of groups from other districts who attended Lobby Days this year, will have an impact. While our efforts won’t solve all the public education problems, and while changes won’t happen immediately, the results of our efforts have been, and will continue to be recognizable.

I know this from experience. Two years ago, I brought a similar group to Lobby Day. At that time, we were dealing with OTES issues, the Third Grade Reading Guarantee and switching from state minimum school days to minimum school hours. OEA staff suggested many things we could bring up in conversations with legislators. Among them was urging legislators, if they changed our laws from minimum days to hours, to keep the wording requiring a five-day school week. There was concern that districts, in an effort to cut costs, would implement four-day weeks, with longer days that would diminish the integrity and effectiveness of schools. We went to our meetings that day and brought up that point, and the five-day language remains in law.

True, we didn’t solve every problem. We still have OTES and the Third Grade Reading Guarantee, but I truly believe we made a positive difference.

The verdict is still out, from a legislative standpoint, on the impact of this year’s Lobby Day, as debate continues about the best solution to the testing crisis and school funding. But no matter what the outcome may be on those issues, I have already seen the impact of our trip.

The positive impact comes not only through legislative items, but also through the process. Our trip engaged a diverse group for a common cause. Teachers were able to share their insights with those who are not in the classrooms every day.   At lunch, my colleague, Heather, told our school board member, Stephen, about proctoring the first round of state tests. She relayed her concern about the validity of the tests, as she explained that, not only was each test different in the questions posed to students, but that some students had five test questions, some had six and some had seven.   Stephen was shocked. He said something like “Are you kidding me?” and went on to talk about his own misgivings about the state tests. Later that afternoon, I heard him relay that story to someone else in a phone conversation.

Any time teachers are able to share their stories and convey the absurdity of our mandated testing system to non-educators, especially school board members, is significant.

It didn’t end there. Spending five hours in a car with Stephen, as well as my Assistant Superintendent and Treasurer, allowed me to build relationships with them. I know more about them, their interests and their families. This makes it easier to talk to them about school-related issues in the future. In fact, I called Stephen last week, and invited him to be part of a meeting this week with one of Senator Portman’s aides, to talk about high-stakes testing policies at the Federal level.

Not only did Stephen accept the invitation, he asked me if I could get him some information on the topic from OEA.

I encourage all locals to participate in Lobby Day.   Bring a few teachers and some other education stakeholders along too. Even though you won’t fix all the ills of education in one day, your participation will definitely yield positive results.