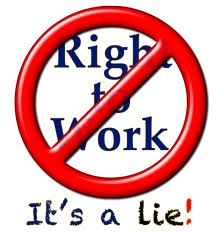 In a world where people misconstrue and twist information to fit their needs and agendas, it’s hard to know who and what to trust. Quotes and video footage get taken out of context. Athletes and celebrities swear up and down that what they are saying is the absolute truth, only to admit to their wrongdoings later.

Take my recent trip to Lansing, Michigan last month to attend a rally protesting the “Right to Work” (RTW) legislation Governor Snyder signed into law. After seeing footage of a physical altercation between labor protestors and Tea Party activists on the lawn of the Michigan Statehouse, my family and friends reacted with sincere concern for my safety. Based on the Fox coverage they had seen, which depicted a chaotic and dangerous situation, they questioned my decision to be a part of the “riot” up there.

In reality, it wasn’t a huge deal at all. Only a handful of the over 13,000 protesters in attendance were involved. A tent came down. There may have been a punch thrown, but I wasn’t close enough to see. The incident only lasted a few minutes. The bulk of the day was spent listening to speakers, chanting and commiserating with Michigan workers about the state of affairs.

Despite the fact that what was shown on TV was a total distortion, that’s what most people are going to believe.

Knowing how often things get sensationalized, I work hard to find reliable sources for information. With a RTW group petitioning to put a Constitutional Amendment on the November ballot, I need to find information I can trust, so I can form an educated opinion. What I’ve found is that the most reliable and meaningful information has come, not from newspaper articles or television shows, but from other educators. Listening to their stories about what it’s like to teacher in states with RTW laws has given me the insights I need to understand why these are harmful and what I can expect if they are enacted in Ohio.

The person I turn to most often is my friend and colleague, Perry Lefevre, who has taught for over 25 years and has been a leader in my local education association. Perry told me what it was like to teach in Waco, Texas upon graduating from Baylor University. “I caught my principal, a family friend, formally evaluating me from the hallway,” he said. “I had a final grade changed on a problem student by the same principal because he was the star running back and wouldn’t be able to play in the fall with a failing grade. And the superintendent/treasurer tried to force me to drive a school bus before and after my school day. My contract was literally a single page in length.”

Unlike Perry’s situation in Texas, my district, under a collectively bargained contract, has set up a procedure where principals have conferences with teachers before a formal observation of the class. The principals take the time to understand the context of the lesson, and listen to teacher concerns about areas in which they would like to approve. The evaluation becomes a useful tool to help teachers improve their delivery of instruction, not as a means to reprimand teachers and tear them down.

The wife of one of my colleagues had the same type of slim contract as Perry in the two public schools where she worked, in Georgia and Alabama, both RTW states. “The contract was not very detailed,” she said. “It was basically stating your employment for that year and consequences if you left early that year.” Describing her experiences in Alabama, she said, “There were some days were we did not get our plan, because of scheduling/ events. There were no real consequences for office referrals. Most of the time, the principal would call their parents to let them know what happened, but even that did not happen all the time. Students were able to cuss at you, flip desks —I even had a girl flash the boys to show them her new bra —and they would be back in your room within minutes and no real consequences was given. We had to cover our own recess and we were also required to eat in the cafeteria with the students to monitor them. We were the only monitors in there.”

In contrast to her one-page contract, my district has a 100-page, thorough contract. This lengthy document works well, because it outlines many procedures and sets parameters for wages and working conditions. It benefits both teachers and administrators, as it establishes a framework for the way schools will operate. It’s a collectively bargained document, so teachers and administrators are able to create this document together. With this contract, teachers in my district don’t lose their planning time, which is a crucial part of the day.

Then there’s Brenda, who taught in the RTW state of South Carolina for 34 years. I was struck by the discrepancy in teacher pay between Ohio and South Carolina. Brenda’s salary after 34 years of teaching is less than what I make after 15 years of experience in Ohio. In fact, teachers in my district with 34 years experience make about $20,000 a year more than Brenda. Brenda explained there was no real salary negotiation in her district. It was more about teacher association leaders “pleading” for a raise. If the administration said there was no money, then raises weren’t awarded, and there was no recourse.

Reflecting on the conversations I had with these three different people who taught in different RTW states at different times, one thing becomes apparent: Teaching in RTW states is a frustrating experience for public school educators, far more so than for us here in Ohio, where teacher associations work collaboratively with administrators to improve schools for students and educators. But that because we don’t have RTW legislation blocking our ability to fairly and collectively bargain for our students and ourselves.

I take the words of my fellow educators to heart. I know I can trust their first-hand accounts, far more than I can those who consider RTW the correct path for Ohio and our public schools.