Posted On: December 13, 2013 by Cornershop Creative 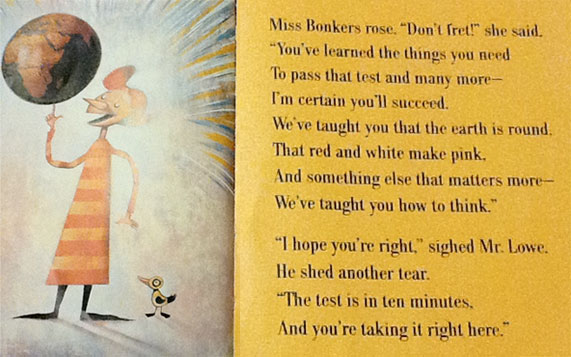 ‘Tis the season for gift-giving, and with so many test-driven “school reform” policies being passed at the Ohio Statehouse this year, now would be a great time to present our lawmakers with gift-wrapped copies of one of the most forward-thinking children’s books ever written, Hooray for Diffendoofer Day. This thought-provoking picture book was primarily written by that great American philosopher, Theodor Seuss Geisel, but he died before he was able to finish it. Adding to Dr. Seuss’s original notes, bits of verses, and rough sketches, author Jack Prelutsky and illustrator Lane Smith finished the fable in 1991.

This insightful book is about an outside-of-the-box kind of school staffed by appropriately named workers, such as the nurse, Miss Clotte, the custodian, Mr. Plunger, and three cooks named McMunch. Diffendoofer School teachers provide knowledge-based lessons mingled with some important skills not found on any list of standards:

The quirkiest teacher of all is the main character in the book:

My teacher is Miss Bonkers, she’s as bouncy as a flea.
I’m not certain what she teaches, but I’m glad she teaches me.
Of all the teachers in our school, I like Miss Bonkers best.
Our teachers are all different, but she’s different-er than the rest.

All schools for miles and miles around must take a special test,
To see who’s learning such and such- to see which school’s the best.
If our small school does not do well, then it will be torn down,
And you will have to go to school in dreary Flobbertown.

Like most of the children in Ohio’s public schools, Diffendoofer students are immediately stressed at the thought of taking such a high-stakes test, and they fret about the prospect of being removed from their beloved school and forced to attend monotonous Flobbertown, where “everyone does everything the same.” They continue to agonize over the test, until Miss Bonkers reminds them:

“Don’t fret,” she said, “you’ve learned the things you need
To pass that test and many more- I’m certain you’ll succeed.
We’ve taught you that the earth is round, that red and white make pink,
And something else that matters more- we’ve taught you how to think.”

Of course, Miss Bonkers is right, and the students get “the very highest score” and pass the dreaded test using background knowledge, combined with the critical and creative thinking skills they acquired through a variety of innovative activities at Diffendoofer School.

The Ohio Legislature’s over-reliance on high-stakes testing for its public schools has forced many districts to re-focus their precious economic resources on hard copy and digital curricula that will aid them in teaching for the test. Could it be merely a coincidence that the same educational companies, that produce the tests and sell those testing resources, also contribute to the campaign coffers of some of the legislators who sponsor the “school reform” laws?  One can only speculate.

In this test-driven era, Art, Music, and Physical Education programs are being slashed in many school districts. Field trips are no longer considered affordable.  Schools are cutting way back on recess as well, hoping it will “give the students more time to learn what’s needed to pass the tests.” It’s sad to see the demise of activities that round out our students’ knowledge-based learning with important critical and creative thinking, yet these are desperate times for many of our public schools, and they’re trying to get the most test-score bang for their bucks.  Unfortunately, this kind of programming will eventually lead to more schools like dreary Flobbertown, where everyone does everything the same.

Before another test-driven “school reform” bill is considered in Ohio, it would be wise for lawmakers to invite public school teachers from around the state to come to the Statehouse to lead a series of book-talks about Dr. Seuss’s Hooray for Diffendoofer Day, accompanied by Diane Ravitch’s book, The Death and Life of the Great American School System: How Testing and Choice Are Undermining Education. Then our elected officials might begin to understand what Dr. Seuss figured out more than two decades ago- continued high-stakes testing is taking its toll on our children, as well as on the institution of public education.

Judging by the lack of teacher input requested by our legislators in recent years, that idea may be no more than another children’s fable.